Hong Kong people love their food and there are a massive range of choices of dining and snacking available in Mongkok. As one of the main shopping destinations in Hong Kong it is where people go to spend an afternoon or evening shopping and window shopping, and all that makes you hungry so restaurants, bars, street food and all are everywhere.

From the worlds cheapest Michelin starred restaurant, through big name brands, small quirky eateries and lots of lots of street food choices Mongkok has something to satisfy every taste and all budgets, as it is all very reasonably priced, particularly when compared with other parts of Hong Kong.

With new choices of food coming and going all the time there are also a few staples that never change, and some exceptional eateries that are known all over the world.  Here are a selection of some of the key places, and things, to taste while you are in Mongkok.

Tim Ho Wan - Despite the simplicity of this ever popular restaurant in Olympian City Mall it has to be counted amongst the top as it is the only restaurant in the district with a Michelin Star. Serving traditional Dim Sum steamed basket dishes to a mix of local and tourists this is great for a lunch or snack.

Cha Chaan Teng - The "Tea Café" is not a specific eatery but a style which is found in abundance in Mongkok. While some have tried to modernize the connoisseur seeks out those with the green and white mosaic tiled floors that have not been fashionable since the heyday of Cha Chaan Teng in the 1960s. Often recognisable by the window display of "Black&White" tinned milk, the Spartan hard seated booths lining the walls and the cashier by the door they serve a selection of Hong Kong favourites that hasn't changed much in 50 years.

Try the extra strong Milk Tea, the Yin-Yang tea which is half tea and half coffee, or an Iced Lemon Water to refresh you.  While meals are available it is for the snacks that these little shops are best known so try a Hong Kong style French Toast or a Pineapple bun, which is named for its appearance, not its taste.  China Cafe at 1077A Canton Road is one of the more traditional places, but there are many in the area and just south of Mongkok proper try Mido Cafe at 63 Temple Street who's upstairs location is so unchanged from the 1960s that it often appears as a location for period TV and movie productions..

With the influx of immigrants from other regions of China there is also come the many unique flavours, and here in the melting pot of Mongkok it is possible to sample many variations on the Chinese style of eating, and while some aspects are universal, such as the use of Chopsticks, others are distinctly regional. For example while rice is common in most of China in some regions wheat based noodles and breads replace it as the staple in meals, though restaurants in Hong kong will always also offer rice to cater to local diners.

Chiu Chow - Chao Inn at the 2/f of Hollywood Plaza on Nathan Road is one of the best known Chiu Chow restaurants in the district. Try the crispy noodle pancake!

The Dining Room - For a taste of Shanghai try the simply named Dining Room at 07, Level 4A, Langham Place, which serves Shanghainese staples including Shredded Duck Noodles and Hot & Sour Soup.

Peking Garden - Located in the Grand Century Place this is just across the road from the Flower Market and the Bird Garden and a great place to stop for lunch after visiting those attractions. To get the full flavour of Beijing don't miss out on the dried Yunnan Ham with Winter Cabbage and of course Roasted Peking Duck served with scallions, cucumber, sweet sauce and wrapped in a wheat flour pancake.

Lucky Dessert - A restaurant just for dessert?  Yes of course, here in Mongkok you'll find many such but this particular one at 25 Soy Street has a great range of European style desserts with an Asian twist. Try the Mango stuff pancakes or the Durian Sticky Rice Rolls! 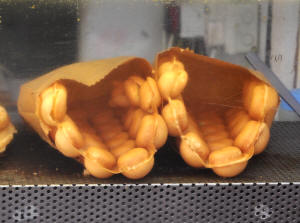 Chinese Egg Waffle - A sweet pastry also known as "eggets" and literally known as "Little Chicken Eggs" these little gems are made from a complex batter with more ingredients than you would care to believe, are only made to order and are best eaten so hot you can only just hold them to tear of the little individual eggs.

Called Egg Waffles both because they taste deliciously of egg, but also because they look like a hexagonal carton of quail sized eggs, this Hong Kong refinement of a waffle might not please a Belgian purist but will surely win over anybody else.  Sold only from street stands, which are little hole-in-the-wall shops, these were once sold from charcoal brazier wielding itinerant street hawkers, but have lost none of their flavour for today being cooked in electrical waffle irons as you wait.

Allow at least 5 minutes for your waffle to be prepared, fanned briskly with a bamboo fan to create just that right level of exterior crunch and internal softness, then served in a perforated brown paper bag to prevent any residual steam from softening them.  Eat them quickly as they do not keep well at all, but you can always come back for more.

Dai Pai Dong - Traditional a street food vendor these small popular eateries have now all moved indoors, though tend to have a few tables and stools on the pavement outside when located in smaller alleys. Serving favourites such as Won Ton Noodle Soup with thin springy wheat noodles paired with soft delicious prawn dumplings in a light shrimp broth. By try other popular local choices as well such as Brisket Beef noodles usually eaten with wide rice flour noodles. A collection of Dai Pai Dong stalls can be found under cover on the 4th floor of the Fa Yuen Street Market Building. Take the escalators past the fresh vegetables, meat and dry good stalls and enter a Spartan but fragrant busy seating area. Most restaurants don't have an English menu but ordering by pointing at the illustrations always works as does ordering what someone else is eating!

Hong Kong people love their food and there are a massive range of choices of dining and snacking available in Mongkok. As one of the main shopping destinations in Hong Kong it is where people go to spend an afternoon or evening shopping and window shopping, and all that makes you hungry so restaurants, bars, street food and all are everywhere.

From the worlds cheapest Michelin starred restaurant, through big name brands, small quirky eateries and lots of lots of street food choices Mongkok has something to satisfy every taste and all budgets, as it is all very reasonably priced, particularly when compared with other parts of Hong Kong.